So Jaxon just recently turned 8 months, How times flies. I dont even remember when he was little anymore, He just keeps learning new things and his personality is starting to show and I feel like such a proud mom everytime I look at his cute little face.

This past week has been so much fun, Jaxon has amused me everyday with the cute little things he does that are so adorable,for most of them I did not have a camera on me :(.

Jaxon has full on started crawling and is standing up on everything. He finally figured out how to sit down after he has stood up and sometimes I think thank goodness for diapers else he might have broken something the way he falls on his bottom. He has also started saying da da da da, I dont think he knows what he is saying but it is cute anyways. Last sunday when we were singing the opening hym he starting singing with us and also in primary...lol. He has also developed a little attitide, I think he knows he has his mommy wrapped around his little finger...
He currently is 27 in long and weighs 19 lbs. He has the cutest little baby legs, I love just squishing them. 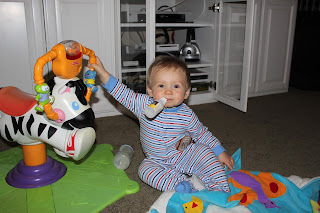 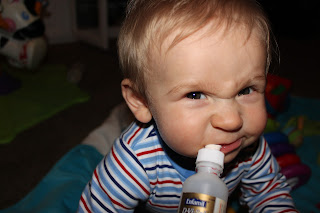 Jaxon loves sucking on the end of bottles, so I gave him an empty bottle of
DiVisol, it has a soft lid, so he loves it, He was so funny this week because he
was crawling around everywhere with it hanging out of his mouth. 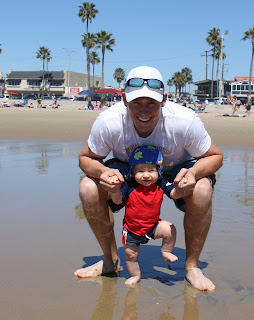 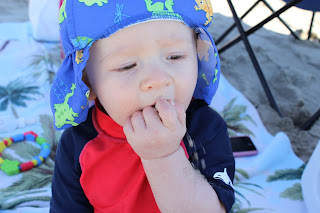 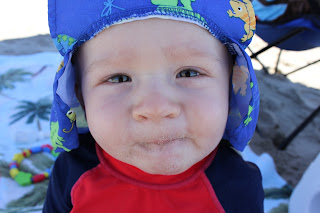 We took Jaxon to the beach last week and he ate his first handful of sand, it obviously tasted ok to him, because he went back for seconds and thirds... we stopped him after that. it was too cute though.
Posted by kerry and taylor at 8:20 PM