Where has the time gone?

So I'm excited to say that I am due tomorrow the 2nd April, but little Troy Carter Seibold decided to come a whole 5 weeks early. he was born 27 February 2012 at 7:16 pm.
I was induced with Jaxon, and we had that option this time, but Taylor wanted to feel the anticipation and excitement of the unknown. What a suprise he got.:)

It was the night of th 26th, I woke up at about 4am with cramps and stretching pain in my belly, I didn't think anything of it. I never had braxon hicks with Jaxon so I didnt know what I was feeling, they just felt like really mild period cramps. So the day of the 27th I had a routine doctors visit where I told her that I was having these cramps and my stomach felt like it was pulling . She said that she really only starts those uncomfortable doctors visit around 38 weeks, but because I was having cramps she checked me and told me I was dilated to a 4 and shouldnt be at 35 weeks. So off I went to the hospital for observation.
I called Taylor and told him to meet me at the hospital and did not believe me..... he definitley got his suprise.

I went to the hospital and waited a long hour in the waiting room to be taken to an observation room, where I was put on monitors to check the frequency of these cramps I was having.
I was checked again about 2 hour later and I was at a 6. The nurse asked me if I was ready because my baby was coming today. I was so nervous and so not mentally prepared for 2 kids, I still had a month to go.!!!!

I was dilated to a 6 for about 2 hours when my doctor suggested patossun to speed up labor. I was given my epidural by a newbie who had to poke me twice for numbing and had to stick that horrible sword into my back three times, to find a spot that didnt hurt me.
And through all that discomfort it didnt even work. I was numb on one side and by the time I was dilated to a 9 I could feel everything and the nurse tried to convince me that I was suppose to feel something so I would know when to push, but I guess she didnt know Ive had a child before and I didnt feel a thing.
Well I started feeling the contractions really bad and alot of pressure and all I wanted to do was push, My doctor eventually got there and all of the nurses and the doctor kind of took their time while I was laying in pain, so I just yelled, I am pushing and then everyone kind of hurried to get it going.

I pushed about 5 times, yelling and crying after every push that I just wanted him out and I didint want anymore children, and I wasnt paying for the epidural.
One good thing that came out of the labor part was our darling little boy and the fact that I didnt tear or get cut...so a quick recovery was awesome. 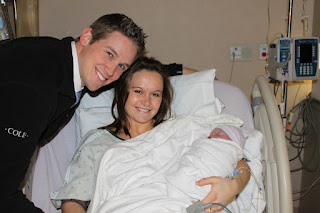 Troy was born at 7:16 pm and weighed 6lbs 15 oz.
I got to hold him for a couple of minutes before that rushed him off to the NICU, where he stayed for 2 more weeks before we could take him home. He had a hard time eating by himself so they had to put a tube up his nose to feed him, which was a sad thing to see. 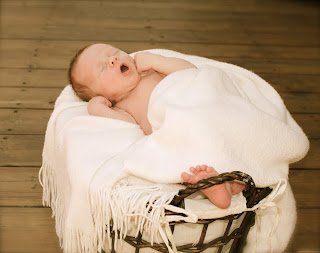 But.... he is now home and eating, and doing so well. We again have been blessed with a mellow baby, he is so peaceful.
I am still adjusting to being a mom of two, but loving every minute of it. I am exhausted as my little Jaxon is toddler who loves to be moving constantly. 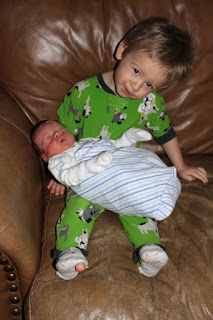 Posted by kerry and taylor at 1:01 PM